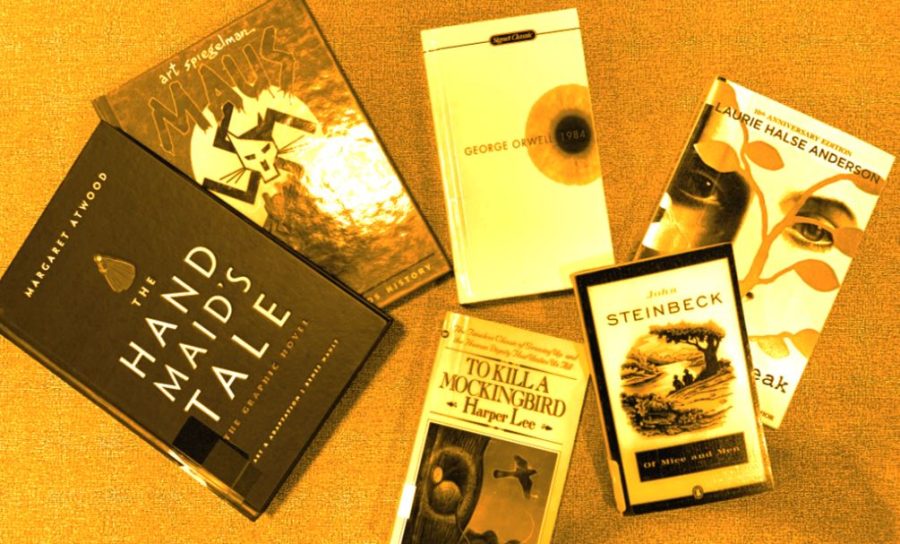 Banned and Challenged Books: Impactful Books Every Student Should Read

Books are an excellent way to learn about different situations, experiences, and cultures. Books also allow readers searching for community or afraid to share their true selfs to feel they’re not alone, resulting in a sense of security. Unfortunately, throughout the world, lots of books are banned due to the topics they explore, which can prevent students from becoming educated on important issues. As a result, society and its knowledge on universal subjects becomes weakened. In that regard, many teachers feel that banning essential books will overall hurt students rather than aid them.

According to the American Library Associate (ALA), the list of banned and challenged books grows every year. As more literature dives into topics that students face or may face in life, such as racism, assualt, gender equality and choices, these books are being deemed more and more controversial.

Thankfully, we are in a school that respects its students’ rights in choosing books that appeal to them, and are able to read books that have messages and themes that many can relate to. The Lancer Ledger was able to interview LRHS’ English teachers and ask them about some of the most impactful banned books they have taught:

An example of a popular book that’s being banned is Brave New World by Aldous Huxley. Published in 1932, this  book falls under the genre of dystopian social science and fiction. Not only does it share themes of community, identity, and stability, but it goes into depth on the major changes that society undergoes during the time period.  That being said, it’s the 26th book listed on the ALA “Top 100 Most Banned and Challenged Books.”

Lakeland’s English teacher Mr. Eric White believes this book shouldn’t be banned due to its powerful message. When interviewed, Mr. White said, “If there’s a single book that people should read in 2022 that can shed light on our culture of entertainment, it’s Brave New World. The social commentary on a culture that has lost itself to dirtraction and culture is incredibly timely. Banning  this novel is a refusal to be critical about society’s direction.”

The Handmaid’s Tale: A banned and challenged book recommended by Ms. Melissa Roush

Another popular book that’s banned is the dystopian novel The Handmaid’s Tale, written by Margaret Atwood. Published in 1985, the book is set in a patriarchal and totalitarian state called the Republic of Gilead in a near-future New England. The novel deeply explores controversial themes such as gender roles, oppression, religion and theocracy. The reason why this book caused so much controversy was mainly because it is based on a future where women have been stripped from all of their rights. The novel has often been described as a potentially disturbing book that gives the message of totalitarianism.  This has raised many concerns from parents, who argue that the book criticizes aspects of christianity, features strong language, and includes emotional and physical abuse scenes as well as many graphic sexual scenes.

One of the many teachers who disagrees with banning books is Lakeland’s English teacher Ms. Melissa Roush, whose favorite banned book is The Handmaid’s Tale. Ms. Roush believes that the book should not be banned because “students need to read this novel to help keep it from happening.” Ms. Roush continued, saying, “Margaret Atwood, the author, has repeatedly confirmed that her book is not a dystopian ‘what if’, but is instead a warning about the government control and subjugation of women.”

Of Mice and Men: A banned and challenged book recommended by Mr. Kyle Letsche

Another major book being challenged and banned is Of Mice and Men by John Steinbeck. This book addresses the perfect tone in the 1930’s and Great Depression, giving students an opportunity to picture and learn exactly what people were going through during those times. The main characters, George Milton and Lenny Small, are two migrant ranch workers looking for another job opportunity, and the book emphasizes the struggles that both characters, and some we meet on the way, had to deal and live through. Even though the book gives insightful topics about that time period, it’s still getting banned. Some of the reasons for this banning is due to the books vulgarity towards topics explored, treatment of women, and portrayal of racism. However, many feel that allowing students today to read about the imperfections of society during these times not only educates them on the history, but helps the younger generation become aware of preventing these issues from resurfacing in the future.

LRHS special education teacher Mr. Kyle Letsche, who teaches in both English I and English II classes, touched upon why exactly he feels Of Mice And Men should not be taken out of school districts. He told The Lancer Ledger, “Instead of reading about this difficult time in American history from a dry boring textbook to memorize facts, students get the feel and vibe of the time period by reading Steinbeck’s outstanding story.” He also added how the main reason this book is getting banned is due to it’s racism. However, he goes on to say how it demonstrates what the time period was unfortunately like. Mr. Letsche believes “the way Steinbeck exposed racism of the time period – even giving the African American character in the book an opportunity to express his loneliness and isolation that results, is a merit of the book and not a fault.” He feels exposing students to the “raw evils of racism” will assist them in understanding “its impact” in history.

To Kill A Mockingbird: A banned and challenged book recommended by Ms. Kali Spoelstra

When talking about widely banned and challenged books, To Kill a Mockingbird by Harper Lee is bound to be on the list. The novel follows Scout, who starts off the novel at six years-old, and takes place over three years in her hometown of Maycomb, Alabama during The Great Depression. During this time, her brother, Jem, and she learns lessons about life, morality, prejudice, and social injustice. Atticus, their father and local lawyer, is a guiding light as the two young people realize the world is not as good as they believed. This coming-of-age story has been banned and challenged for years due to use of some racial slurs, race and the black experience, and, according to ALA, the inclusion of a “white savior.”

The Ledger spoke with Ms. Kali Spoelstra, English and journalism teacher at LRHS, who has taught To Kill A Mockingbird both at Lakeland and her previous district. She feels it is an important story to teach because there are so many lessons on loving our neighbors – no matter who they are or their background. She also said that there are profound lessons on race and racism that can be connected to the world today. On top of this, the novel teaches its readers to stand up for what you believe in and why it is right to make a difference in the world in a way that is peaceful and logical.

“You just hold your head high and keep those fists down. No matter what anybody says to you, don’t you let ‘em get your goat. Try fighting with your head for a change” – Atticus Finch.

Maus by Art Spiegelman is a graphic novel that visually details the personal story of Spiegelman’s parents’ experiences in Poland, and one that made big news this year when a district in Tennessee removed it from their eighth grade curriculum. The novel takes place during the Holocaust in the 1930s. The novel not only depicts the countless struggles Spiegelman’s parents had dealt with as Holocaust survivors, but the effects it had on his own life and views. Maus is being banned and challenged for its visual depictions of cruel violence, nudity, and profanity through portraying Jewish people as mice, hence the title being the German word for ”mouse.” The Holocaust was undoubtibly a horrific span of events, as illustrated in the novel. Many believe the novel should not be banned as it is a way to educate students on the violent persecution of a group of people and how they gallantly fought for their lives to survive. The novel also explores the effects of the Holocaust on future generations and can be used to educate readers on combating prejudice in the present day.

The Lancer Ledger interviewed English teacher Ms. Jamie Cawley about Maus and her views on it as being banned. She praised the novel for its illustrations and text that truly portray the suffering, sorrow, and triumphs of the event. Ms. Cawley then went on to explain how she feels the banning of books is a dangerous practice as it obscures history rather than teaching about it. According to Ms. Cawley, ”We must teach our children the importance of facing the past, holding society accountable for its actions, and most importantly, growing and learning from it.”

According to the English departmant, there is also a deep importance of not banning popular young adult novels (like Speak, 13 Reasons Why, The Perks of Being a Wallflower, The Hunger Games, The Hate You Give) as those are the books teenagers are more likely to read and connect with. The lessons about mental illness, race, and society are so important to learn and discuss. Novels also teach us how to feel sympathy and empathy for things we might not feel or be connected with or give us the opportunity to connect with something or someone who is dealing with things we are.

Overall, the banning of books in school districts has quickly become a prevalent, yet heated topic. No matter one’s standpoint on the matter, it is important to be mindful of differing opinions, and to appreciate the literature one individually enjoys. In the words of Mr. Letsche, “Words have power – don’t you want to know what words/powers people are attempting to keep hidden from you?”