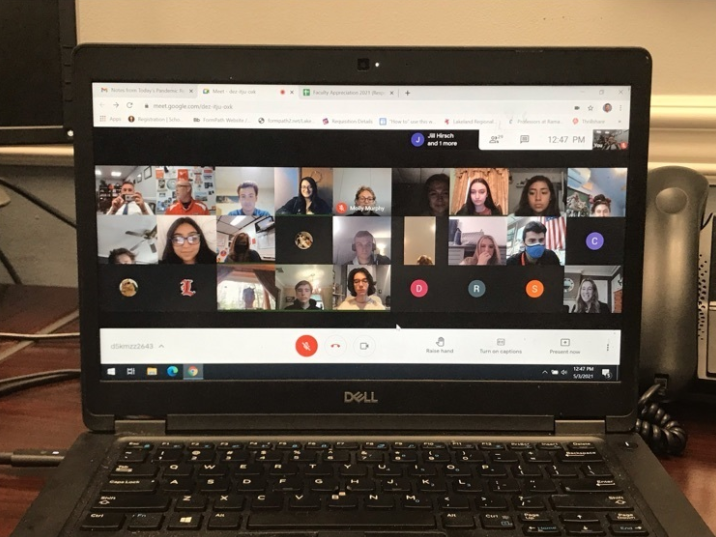 On May 3, a town hall event focused on voting rights with Congresswoman Mikie Sherrill (NJ-11) and students at Lakeland Regional High School. This event was organized by the Lakeland Chapter of Democracy Matters. (Courtesy of the Lakeland Live Feed)

On May 3, a town hall event focused on voting rights with Congresswoman Mikie Sherrill (NJ-11) and students at Lakeland Regional High School. This event was organized by the Lakeland Chapter of Democracy Matters.

Courtesy of the Lakeland Live Feed

Stand Up “For the People”

Jacob Wierer is a senior at Lakeland Regional High School in Wanaque, NJ.  He is the co-president of the Lakeland Chapter of Democracy Matters and managing editor of the Journalism Club.

Since the Shelby County v. Holder Supreme Court decision struck down protections and enforcement provisions of the 1965 Voting Rights Act, Americans’ right to vote has been threatened by an alarming number of state bills seeking to limit voting access.  According to a February report from Brennan Center of Justice at NYU Law, 165 bills intended to limit voting rights were introduced to 33 states in the early months of 2021.

I, along with many of my fellow classmates at Lakeland Regional High School, were alarmed by this statistic.  As New Jersey residents, our voting rights have been largely protected.  Online voter registration and universal mail in ballots made it easy as I voted for the first time in 2020.  Unfortunately, many legislators across the country have decided that voting will not be as easy in their state.  Many have decided to make voting as difficult as possible.

As a high schooler, I am witnessing first hand an epidemic of apathy toward political participation amongst young eligible voters.  Students increasingly feel the current US government refuses to provide any meaningful change on issues they care about.  Many feel that the voting system is something designed to be difficult and cumbersome, that it is something designed to keep them out of government.  They feel that their voice is suppressed, and in this, they are not wrong.

Included in the 165 voter suppression bills of 2021 are bills that specifically target America’s youth.  Many state legislators are attempting to remove student IDs as acceptable voter IDs.  The same report from NYU Law reports that other states are attempting to suppress voting by slashing early voting, making it difficult to vote out of state, limiting opportunities to register to vote, and even prohibiting student pre-registration.   Efforts to make it as hard as possible for students to register and vote have become the new normal in too many states.

Distrust in the election process by youth is substantiated.  New laws are needed to expand voting opportunities to all eligible citizens across the nation and to further protect voting rights on the federal level.  The United States desperately needs legislation to revitalize the 1965 Voting Rights Act and to reassert our right to self government.

This is the purpose of the “For the People Act” (HR 1, SR1)  and the “John Lewis Voting Rights Advancement Act.” Both Acts were passed by the House of Representatives in 2019,  but the Senate Republicans refused to bring them to a vote.  Now, in 2021, it’s time for our democracy to guarantee that students and other Americans can actually cast their votes to make their voices heard. To counter state efforts to suppress voting, the Senate must pass these landmark Acts.

The “For the People Act” is an omnibus election reform and voting rights bill.  The bill contains several provisions to reduce the influence of corporate donors and “dark money” in politics. The bill includes a system for the public financing of campaigns, several new donation limits, and regulations on inaugural committees.  This bill is also attempting to make our elections fair and accessible for every eligible American.  The legislation creates non-partisan commissions to draw congressional districts, and institutes no-excuse absentee ballots and online voter registration in all states.  Overall, this legislation is intended to make it easier to participate in elections, while providing greater security and addressing serious improprieties in the election system.

The “John Lewis Voting Rights Advancement Act” is designed to strengthen the security of our right to vote.  The Act reimplements the regulation that requires states to seek federal approval before making changes in election laws or protocols.  This is the section of the 1965 Voting Rights Act that was stripped by the Supreme Court in the Shelby County v. Holder decision.

The “John Lewis Voting Rights Advancement Act” and the “For the People Act” are laws which will secure the voting rights of all eligible Americans.  Both of these bills are essential in combating the voting restrictions aimed at minorities and youth that are appearing in statehouses around the nation.

In the debate on these pieces of legislation, many opponents of the bills have cited the possibility of increased voter fraud as their primary concern.  Voter fraud is a quantitative argument, and thus can be examined and quantified by readily available statistics.  In the 2016 and 2018 elections, the Washington Post calculated a .0025% rate of potential impersonation related voter fraud, even in states without ID requirements and with same day voter registration.  Reuters reported that Oregon, a state that long utilized universal mail in voting, has “reported around a dozen cases of proven fraud” since 2000.  Large scale voter fraud is a serious issue, but claims of it in the United States are patently false. The events of January 6 serve as an example of the terror that occurs when lies of voter fraud are fed to a misinformed public.  These same lies are now being peddled by legislatures across the country as they attempt to prevent minorities and young people from voting.  It is important to know the truth about this issue.  As reported by the Brennan Center for Justice  at NYU Law, in the United States, you are more “likely to be hit by lightning than to commit voter ID fraud.”

Yesterday, I spoke with students from the Democracy Matters! Club at Lakeland High School. Gen Z has been growing into one of the most active, motivated, and excited portions of my constituency and it is always inspiring to speak with them. pic.twitter.com/6bBIffx4o2

Yet there are still a troubling number of elected officials who oppose the “For the People Act” and the “John Lewis Voting Rights Advancement Act.”  To those leaders, I ask you to consider what it says to America’s youth when you burden our right to vote.  HR1 and the John Lewis Voting Rights Advancement Act have the sole intent of allowing citizens to participate more freely and actively in their government.  According to Data for Progress, HR1 is supported by 67% of likely voters and over 55% of likely Republicn voters.  What does it say about your vision for America when you fly in the face of overwhelming public opinion to oppose efforts to strengthen our republic and increase our democratic participation?

Despite opposition, HR1 passed the House in March of 2020, and has been introduced to the Senate, and the “John Lewis Voting Rights Advancement Act” is expected to be re-introduced to the House.  Both of these pieces of legislation secure our right to self government.  These acts can restore students’ faith in government and in the fairness of our election process.  Every issue, every change Americans wish to see in our nation is dependent upon our ability to select those who represent us.  Without HR1 and the John Lewis Voting Rights Advancement Act, our ability to do so is not guaranteed.

So I urge my representatives and my fellow Americans to support the “For the People Act” and the “John Lewis Voting Rights Advancement Act.”  When you consider your support of this legislation, I ask you to remember the words of the late Dr. King:  “Injustice anywhere is a threat to justice everywhere. We are caught in an inescapable network of mutuality, tied in a single garment of destiny. Whatever affects one directly, affects all indirectly.”  Call your senators and urge them to support and bring SR1 to a vote. Call your representatives and demand they pass the John Lewis Voting Rights Advancement Act.  Disenfranchisement is nothing less than a deprivation of life, liberty, and the pursuit of happiness.  Americans have always stood for these unenumerable rights.  We must stand once again.