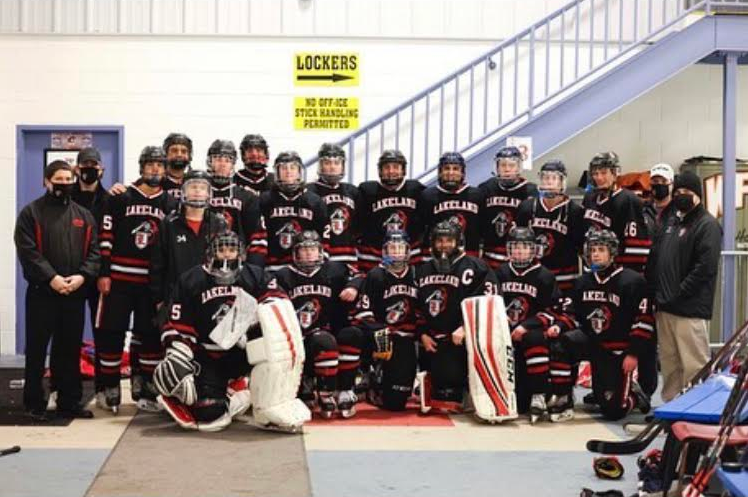 The LRHS varsity hockey team had a strong season, despite the pandemic. (Courtesy of Scott Martin's Instagram)

The LRHS varsity hockey team had a strong season, despite the pandemic.

Lakeland Regional’s ice hockey team went the first seven games of the 2021 season undefeated and put up an impressive record of 10-3-2. Lakeland was also one of few teams to put up ten wins in this unpredictable and shortened season.

However, with little practice and no preseason the Lancers struggled to get on their horses and get the wheels moving.

By the end of last season, there was so much hype and excitement built around this year’s senior class. Who would’ve known 5 days after the season ends, we would be shut down for the rest of the year. For the tight knit Lakeland hockey players, this meant no team lifts, no team conditioning, and no team bonding whatsoever.

The summer came, and the hockey team was still prohibited from having any sort of team practices.

However, many players took it as their responsibility to work hard in the extra long offseason and get to work. November rolled around; who would’ve guessed another pushback to December. December comes; December went; still no highschool hockey for the Lancers.

However, January comes around and after a minor scare of corona, the Lancers hit the ice for the first time in almost a whole year.

Lakeland went on to beat top seeded, and current gold cup champion Ramsey a convincing 5-1 win. Senior, Justin Ross spoke with us about that win. “It was electric. The boys were flying up and down the ice kicking Ram booty. There were a couple huge hits, and I’m pretty sure a few Ramsey players went home after the second period,” he laughed.

The Lancer Ledger got a chance to talk with leading goal scorer, and sophomore Brian Cole. “It was a little weird at first, and the guys were pretty sloppy in the first couple minutes but once everyone settled in, we ended up having a pretty decent game.”

When Cole was asked about how he was able to improve on his last season and how he managed to do so well he replied, “Yeah I just got really good at putting the puck in the net, and it helps having all the support and cheering on from the moms in the stands.”

Lakeland senior and student athlete Shane Straubinger also spoke on this season, “Yeah it was pretty disappointing to end like we did, but I’m happy to have played with these guys and proud of the many things we accomplished over our four seasons.”

Ben Kopacki, senior goaltender, spoke with us about some of his favorite moments over his four seasons. “Getting to play in the state semifinal game is definitely top of my list for sure. But I have to say playing St Joes in the Gold Cup Final was so much as well. Practically everyone from Ringwood showed up to support us.”

Despite a disappointing ending and a result they were not looking for, many of the Lancers took over many of the spots on the award/honors lists.