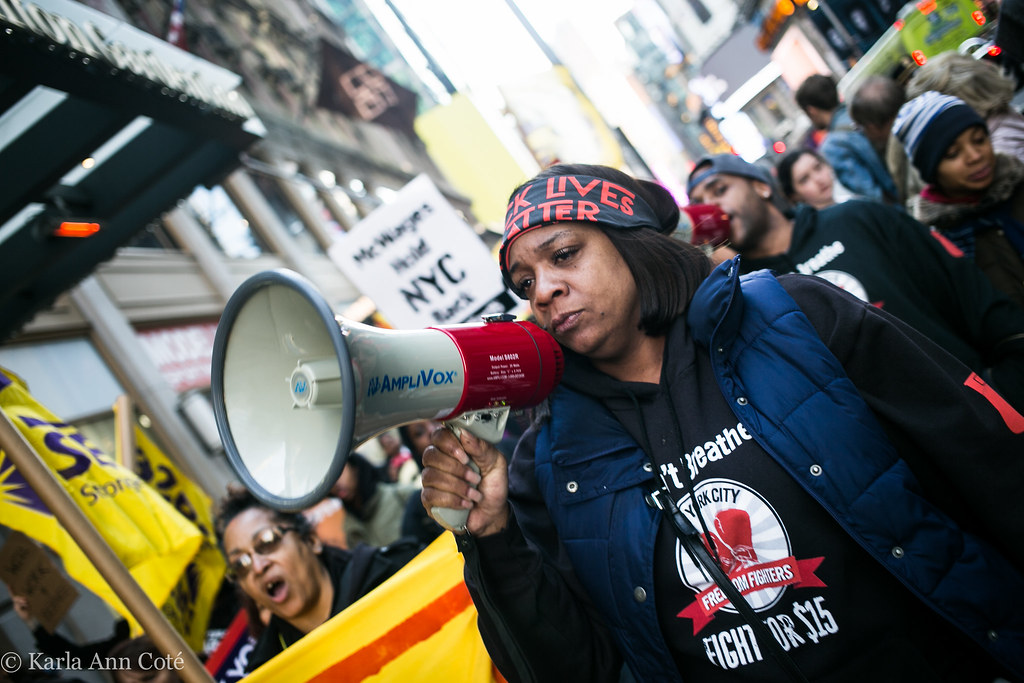 Americans need to continue to exercise their right to protest in pursuit of a more perfect union, like at this 2016 BLM protest. ("New York Protest" by KarlaAnnCoté (CC BY-ND 2.0))

Americans need to continue to exercise their right to protest in pursuit of a more perfect union, like at this 2016 BLM protest.

First and foremost, the actions of the police officer that killed George Floyd appeared most definitely criminal, and Floyd’s death was a homicide, with the officers involved having been charged with such.  From the evidence available to the public, this is certainly beyond reasonable doubt, and as Americans, we mourn Mr. Floyd’s loss.

This incident is a tragedy and an atrocity.  It is absolutely inexcusable, but it is nothing new to America.  The recent outcry may be in a new electronic form, but it is only the latest response to a 400 year streak of these incidents.  The incidents are a result of the systematic racism introduced into the nation long before Thomas Jefferson penned the Declaration of Independence.  It is naive to believe that these are isolated incidents; they are not.

These incidents are obviously not caused by all police, or even the majority.  Still, the issue appears as though it will remain a problem as long as America struggles to fulfill its promise of “liberty and justice for all.”  The incidents are symptoms of troubled law enforcement and criminal justice systems.  Reform is requested and needed.  There are many pieces of public policy seeking to slow this senseless violence: more police accountability, stricter training and better protocols for law enforcement, and, what might be one of the most vital solutions, expanded community policing.

Action is required, and the American people have accurately noticed that the government is dragging its feet.

It is our leaders’ failure to act that has pushed Americans into the streets.

Dr. Martin Luther King writes in his “Letter from a Birmingham Jail” of the necessity of nonviolent demonstrations.  “Nonviolent direct action seeks to create such a crisis and foster such a tension that a community which has constantly refused to negotiate is forced to confront the issue. It seeks so to dramatize the issue that it can no longer be ignored.”

Protests are incredibly effective ways to force attention to an issue.  They are peaceful, yet forceful ways to present an opinion and show solidarity in the face of overwhelming division.  Many people would like us to believe that to protest in the streets and to practice civil disobedience is un-American.  To protest is to embody the very principle on which America was founded.  To protest, to practice civil disobedience, is to stand up in exercise of your fundamental freedoms and demand change.  To practice civil disobedience is a statesman’s way of expressing discontent and seeking improvement.  It is a way of addressing an issue that requires immediate attention, for “justice too long delayed is justice denied.”

It is our leaders’ failure to act that has pushed Americans into the streets.”

Non-violent demonstrations are the governed asserting their power over the governing in one of the ways foreseen by John Locke and Thomas Jefferson so many years ago.

Protests and civil demonstrations, such as those that occurred in Newark earlier this week, show the success of the American model of democratic dissent.  What we must be mindful of in these troubled times is the nature of our protests.  To practice civil disobedience is to practice peace. It is to see violence and overwhelm that violence with undying, unremitting peace.

Dr. King asked of himself and his followers before his march in Birmingham, Alabama the following.  “Are you able to accept blows without retaliating?” “Are you able to endure the ordeal of jail?”  We have all seen the images of children blasted with fire hoses and we read Dr. King’s work that was originally written on the margins of a newspaper in jail, yet we have never seen an image of Dr. King and his followers attacking a single policeman or a single citizen.  We have never seen Dr. King torch a building or destroy a police car.  And today, America is so much better off because Dr. King saw hate, saw legitimate crime, and saw destruction, and met these instances of violence with nonviolence.

This week, Americans in every corner of the country saw what Dr. King was speaking of in “Letter from a Birmingham Jail, ”  from videos of demonstrators and police hugging and shaking hands to police kneeling in solidarity with protesters to protesters linking together to form human barricades to protect people and businesses.  As American looks towards change and reform, let us rejoice and respite in these situations.

As civil protest is distinctly American, rioting is distinctly not.  To riot is to throw your rights away and to choose violence and division over solidarity.  Rioting fights violence with more violence in the expressed way Dr. King spoke out against. Unfortunately, there are individuals who have not read “Letter from a Birmingham Jail,”  and the demonstrating public also suffers from a group of a violent minuscule few.

In America we do not make up for crimes by committing more crimes. To riot and to loot businesses hurts not only the credibility of one’s cause and the livelihood of one’s community, but endangers the right to freedom of assembly for those around the world.  Imagine how much those students back on June 4, 1989 in China would give to be able to dissent in the way we do today.  Civil disobedience shows the world the strength of American democracy and nonviolent demonstration.  It shows how powerful we are united.  Rioting shows how powerless we are divided.

We are given the fundamental human right to protest by god, but we have no god given right to harm others and their possessions.  We are demanded by basic human decency to stand up and speak out when we see an injustice, such as we saw in Minnesota.  But we are also demanded by basic human decency to do so nonviolently and to do so in the name of a better, more peaceful future for us all.

Americans need to continue to exercise their right to protest in pursuit of a more perfect union, but we must also remember the words of Dr. King and the nature and objective of our movement.  Violence in the face of violence can yield no beneficial resolution.