Lakeland Regional High School beat the winter blues with a pep rally full of entertainment. On January 24, 2020, LRHS students gathered in the west gym to enjoy celebrate winter sports and school spirit with performances from the Lakeland varsity dance team, various teachers in a spinoff of the television show The Masked Singer, and a sneak peak at the All-School Production.

After the revamp of the fall pep rally, LRHS students seemed interested in seeing what this next event had in store, and the Student Council, run by advisers Ms. Jenni Harmon and Ms. Caitlin Vauter, did not disappoint. (Check out the gallery at the end of the article for more great photos from the event!)

Students arrived during their block five class to music and lots of noise, and began the afternoon with a performance of the national anthem by junior Kaylin Ponce. The energy level skyrocketed as Assistant Superintendent Michael Novak introduced the host, senior Frankie Scarnaty.

Frankie began by introducing the captains of each of the winter sports teams. These included boys ice hockey, swimming, boys and girls basketball, boys and girls winter track, boys wrestling, competition cheerleading, bowling, fencing, dance, and Lakeland’s Special Olympics athletes. Each of the captains were met with copious applause and cheers from fellow teammates.

Team introductions were followed by another introduction of Lakeland’s 2020 teacher of the year, math teacher Mr. Daniel Thomas. His coworkers and students were very proud of him, even though he chose not to give any words of wisdom to the crowd.

Next, a performance from the award winning varsity dance team followed. They performed their pom dance to a medley of various Broadway tunes. The girls did a wonderful job showcasing their talent, and the students agreed with a ton of cheers and applause.

Afterwards, the All-School Production sang the title song from their 2020 show, Mamma Mia, with senior Annie Wogisch as Donna. The cast was decked out in tropical attire and gave an upbeat performance for the student body.

The last event of the hour was a brand new idea for the students of Lakeland. The teachers, motivated by Ms. Harmon and Ms. Vauter, organized their own version of the popular television show The Masked Singer. Five teachers sang a song dressed in different animal onesies, and a panel of five senior sports captains guessed who each singer was. The students had a lot of fun and laughed a lot trying to put faces to the voices of teachers from various wings of the school.

Once the bell rang, students flooded out of the gym in order to catch their buses to go home for the weekend. Overall, the pep rally was quite successful. Student engagement was higher than in the past and the events were entertaining. The Ledger and student body is already looking forward to the next pep rally in the spring! 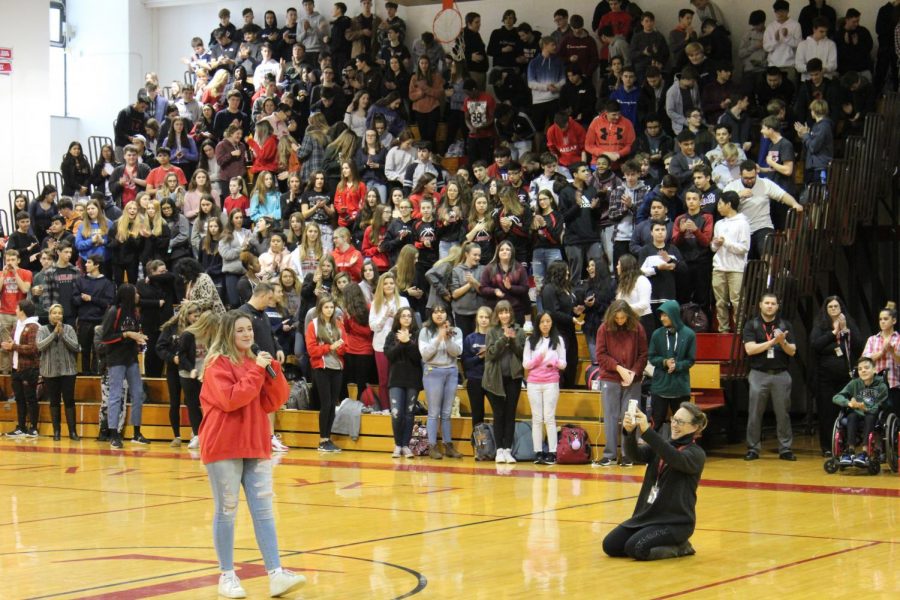