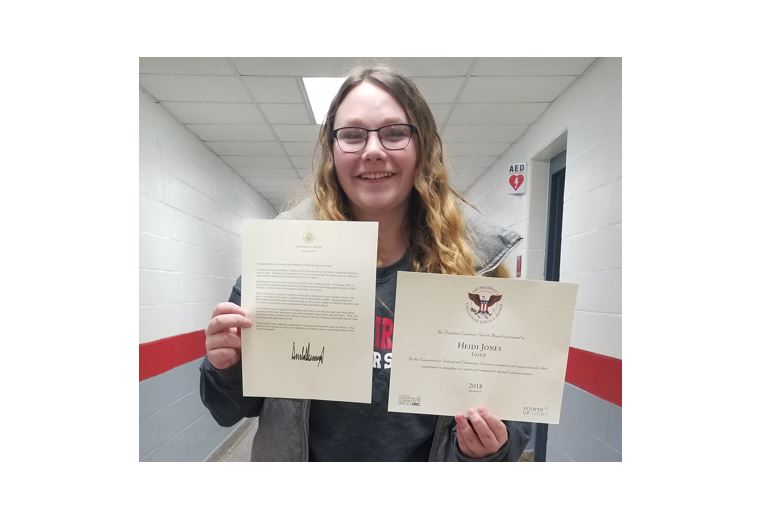 Heidi Jones was honored for her extensive volunteer hours with a President’s Volunteer Service Award.

Not many people can say they have received an honor from the President of the United States. However, one Lakeland student can! Heidi Jones, who is a junior at LRHS, was awarded the President’s Volunteer Service Award for the extraordinary amount of volunteer hours she has put in throughout her 3 years in high school.

The President’s Volunteer Service Award is an award that is given to citizens that complete over a certain amount of volunteering hours. For her age group, Jones had to complete over 250 volunteer hours over the past year to achieve the most prodigious of the awards levels – gold.  Jones did almost 10-times that, completing over 2,000 volunteer hours this past year.

When asked how it felt to receive such an award, Jones told the Ledger,  “I was kind of surprised because initially I hadn’t applied for the President’s award. I had applied for the Prudential Spirit of Community Awards, in which I had made it past the first round. When I didn’t make it to the second round, the foundation was still impressed with how many hours I put in, so they conversed and decided to award me the President’s Award.”

Over the past year, Jones was able to put in over 2,000 hours of volunteering to give back to her community. Most of the time she spent volunteering was at Skyline Lakes Fire Department in Ringwood and the Wanaque First Aid Squad.

When the Lancer Ledger interviewed Dr. Matthew Certo, principal of Lakeland Regional High School, about his opinion on Jones winning the award he said, “I’m extremely proud of Heidi. She is a hard-working student, and she definitely deserved this award.”

In this day and age, where many people rather be on social media rather than volunteering around their town, Jones is an inspiration to all. She was able to volunteer for more than 2,000 hours and still juggle school and other activities, including clubs and writing for the Lancer. We at the Lancer Ledger and all of LRHS wish Heidi a well-deserved congratulation.