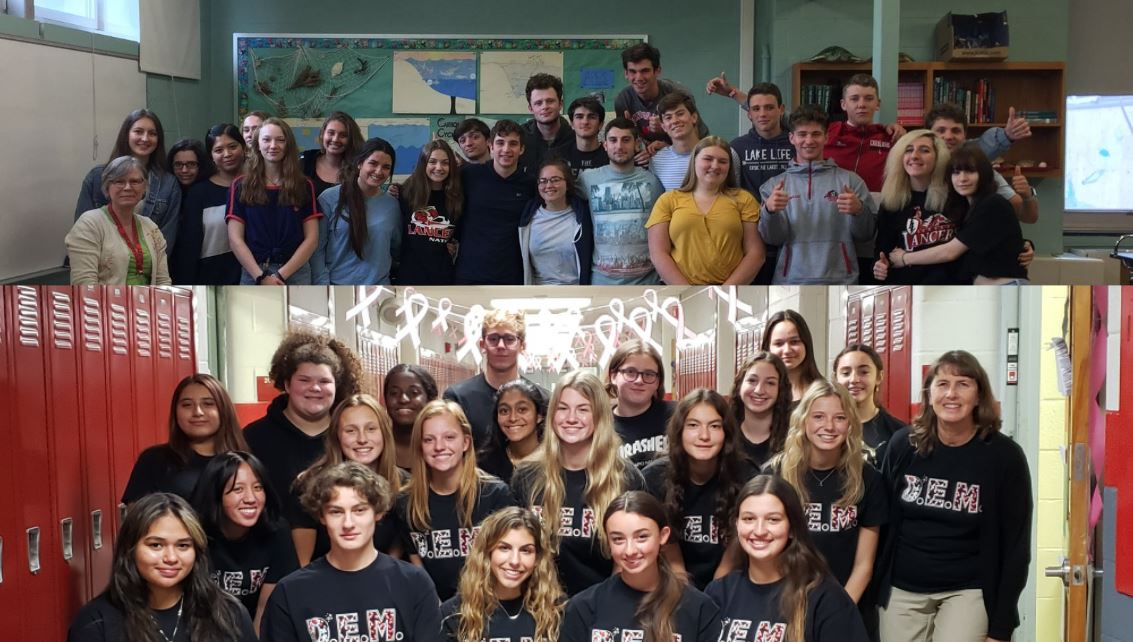 Ms. Ziegler (top) and Ms. Nangle have always been there for their students, both academically and extracurricularly. Between classes and clubs, both teachers have made a lasting impact at Lakeland. (Courtesy of LRHS Yearbook)

Ms. Ziegler (top) and Ms. Nangle have always been there for their students, both academically and extracurricularly. Between classes and clubs, both teachers have made a lasting impact at Lakeland.

A Fond Farewell: Looking Back at Over Two Decades of Teaching Science at LRHS

“The important thing in science is not so much to obtain new facts as to discover new ways of thinking about them.” – Sir William Lawrence Bragg

Out of all educational subjects, few are more uniquely and universally intriguing than science. With countless branches and fields, science is full of information and possibilities that demand abstract thought and complex reasoning. It’s a subject of wisdom, of character and of a beautiful but elegant complexity, garnering immense respect in its ability to explain and prove the very world around us and predict the infinite number of changes that have occurred, are occurring, and will occur for the rest of time.

It’s only fitting, therefore, that those who teach science portray these same qualities of wisdom, character and a dedication to understanding the world around us. Indeed, Lakeland Regional High School science department teachers Ms. Lorraine Nangle and Ms. Barbara Ziegler are excellent representations of this idea.

Dedicated to sharing with students the wonders of various topics within the sciences, Ms. Nangle and Ms. Ziegler each have over twenty years of experience in the LRHS science department. With both teachers beginning their time at Lakeland in the late 1990s, there is much to look back happily on over the past two decades.

And though bittersweet for students and colleagues alike, Ms. Nangle and Ms. Ziegler will be entering a new chapter in their lives after the ‘21-’22 school year has concluded. The two LRHS science teachers are both retiring after a combined 44 years between them – so allow us to look back on the memories and experiences of Ms. Nangle and Ms. Ziegler from the past two-plus decades.

Ms. Lorraine Nangle began teaching at Lakeland in 1998, after two years of teaching at a private school and 12 years of working as a chemist. She began at Lakeland with Earth Science, Physical Science, Horticulture and Forestry. Thereafter, Ms. Nangle also taught three levels of biology, two levels of chemistry, physics and Marine Science.

In her own words, however, Ms. Nangle’s “claim to fame” is starting the Forensic Science program. According to Ms. Nangle, “It grew to include the SUPA (Syracuse University Project Advance) college level course. Forensics is by far my favorite because it includes all the various sciences (Biology, Chemistry, Physics), as well as Psychology, Computer Science, Mathematics, Engineering, and of course the Application to Law. It teaches students to think outside the box and to NOT take things at face value – to look at the evidence even if you don’t like where it is leading.” Indeed, Forensic Science is a popular class among students and brings interest and excitement to the science department at Lakeland. Ms. Nangle told The Ledger, “[The] class involved much of my time prepping for the various labs and crime scenes, but it was fun for the students and myself.”

For Ms. Nangle, working with students always brings pleasure and excitement. In terms of favorite moments, she “loved it when students who were struggling in class all of a sudden ‘get it.’ The look of relief and joy on their faces [is] what makes me feel like I accomplished something. I will miss all of my ‘favorite’ students and Lakeland’s great staff.”

Outside of daily classes, Ms. Nangle also started the medical club at LRHS – the DEM Club. According to Ms. Nangle, “It gives students an opportunity to talk with professionals and learn about the various fields/jobs in medicine which are outside the typical doctors & nurses.” Victoria Sabatelli, a sophomore and member of the club, told The Ledger, “It’s a great opportunity for students to learn what they might want to do in the future in the field of medicine. Ms. Nangle takes time out of her day to make the club enjoyable, and she is a wonderful teacher.”

Of course, it’s not just current students that have enjoyed their time with Ms. Nangle – with so many years of teaching at Lakeland, she has known many, many unique students. In her words, “I loved it when alumni came back and told me what they are doing and how much they enjoyed my class.”

It’s sometimes easy for students to forget that teachers have lives outside of school, just like them. In Ms. Nangle’s spare time, she enjoys “crafting, gardening, hiking, kayaking, horseback riding, bowling, reading and traveling.” During her retirement, Ms. Nangle already has exciting plans for the summer and beyond. In an interview with The Lancer Ledger, Ms. Nangle told us, “First I plan on spending time with my grandchildren who live in North Carolina. I also plan on visiting other family members who live in Florida, Virginia, and Massachusetts. I have a big family reunion celebration this summer which involves over 250 people, and four weddings in various states which my husband and I will make into mini vacations. Then I hope to catch up on the things I have postponed due to lack of time.”

Ms. Barbara Ziegler began teaching at Lakeland in 1999. Previously, Ms. Ziegler had taught at various schools throughout the region, including Bergen Community College, the State University of New York, DePaul High School and others. She began at Lakeland as an Earth Science teacher, and “since geology is my first love…sharing this love with students was amazing,” said Ms. Ziegler.

Talking to The Ledger about her accomplishments, Ms. Ziegler shared how she developed the Marine Science course along with science department colleague and fellow teacher Ms. Brenda Ferguson. Ms. Ziegler reported, “Being able to expose students to the wonders of the marine world was awesome, too. When Ms. Ferguson and I first developed the course, I focused on the oceanography portion of the class and Ms. Ferguson handled the biological portion of the class. Eventually, I had to teach the biology portion too, and I was a bit apprehensive about doing the dissections. However, those dissections had become my favorite part, and being able to dissect a shark was a wonderful experience and one I cherish.”

If you ask Ms. Ziegler about her most important subject, though, she’ll tell you about the wonders of Environmental Science. Ms. Ziegler reflected, “Environmental Science has become such an important topic for our world today. It is my mission to help students see that their choices do make a difference. I think this has been the most important subject I have taught at Lakeland. Pre-pandemic my APES [AP Environmental Science] students and I would meet for review sessions a few months before the exam. We reviewed a lot, but we also got to know one another in a way that was not possible in an 80 minute block. My APES students will always be my ‘apes’ and each one holds a special place in my heart.”

Of course, a discussion of Ms. Ziegler has to mention the teaching awards she has won during her time at Lakeland. In her own words, “One of my most cherished memories is being chosen as Lakeland’s Teacher of the Year (2016-2017) and then being selected as the Passaic County Teacher of the Year. It meant a lot to me to be honored by my colleagues and my students.”

Outside of day-to-day classes and an impressive academic career, Ms. Ziegler said that “some of my favorite memories include sharing yoga with students, and seeing them experience the benefits of yoga.” When asked about some other activities Ms. Ziegler participated in during her free time, she told The Ledger, “I love to garden. Both of my parents were wonderful gardeners and I am looking forward to being able to nurture my garden in the same way they did. I will continue to expand my yoga teaching and practice. And I am looking forward to developing new hobbies.”

And speaking of hobbies, Ms. Ziegler has interesting and exciting plans for her upcoming retirement. “I want to spend more time in my garden,” said Ms. Ziegler. “My goal is to make my property more attractive to native pollinators with more native plants. I plan to travel – some places I want to see include more of our National Parks, Scotland, Australia and New Zealand, and a lifelong dream is to visit Pompeii. I am considering continuing my training in mindfulness and hope to be able to share that with others to help them manage their stress. And I want to spend more time with family and friends.”

LRHS science teacher Mr. Giorgi Tchubabria presented an interesting perspective to The Ledger: “At one point I came across the idea that every teacher has a specific ‘power’ that makes them a good teacher for their students. Once, I passed her class, and all I saw was students lying on benches [at lab tables,] and I walked in and I realized, the students were meditating.” As Ms. Ziegler mentioned, she enjoys sharing yoga and mindfulness with her students.

Mr. Tchubabria continued, “she [Ms. Ziegler] was giving this positive vibe to students…and I realized there was this magic, calming effect, and I felt it, I myself felt it. When [school administrators] are walking down the hallway and popping into classrooms, they give off an atmosphere like that of ‘Flight of the Bumblebee.’ It’s as if they can walk through walls, and they are so busy, everywhere at once. Ms. Ziegler, however, is like ‘Won’t You Be My Neighbor.’ I see this calming effect, and I think that is her power. Even at meetings, she pops in and I see her and she sets the environment just by appearing, and I feel her calming effect.”

To best convey Ms. Ziegler’s devotion and dedication to teaching and to her students is perhaps Mr. Tchubabria’s summarizing quote: “Quality education coupled with her very welcoming atmosphere – every word and every expression matter and count.”

Thank You for the Memories

Speaking for and from the Lakeland community, we wish Ms. Nangle and Ms. Ziegler a fond farewell and hope they make many fun and exciting new memories in their retirements.

In the words of Ms. Nangle, “I have very fond memories of Lakeland and wish everyone – students and staff – a fond farewell and much success in their future. I will always be a Lancer!”