Behind the Curtain: The Wedding Singer Production by LRHS 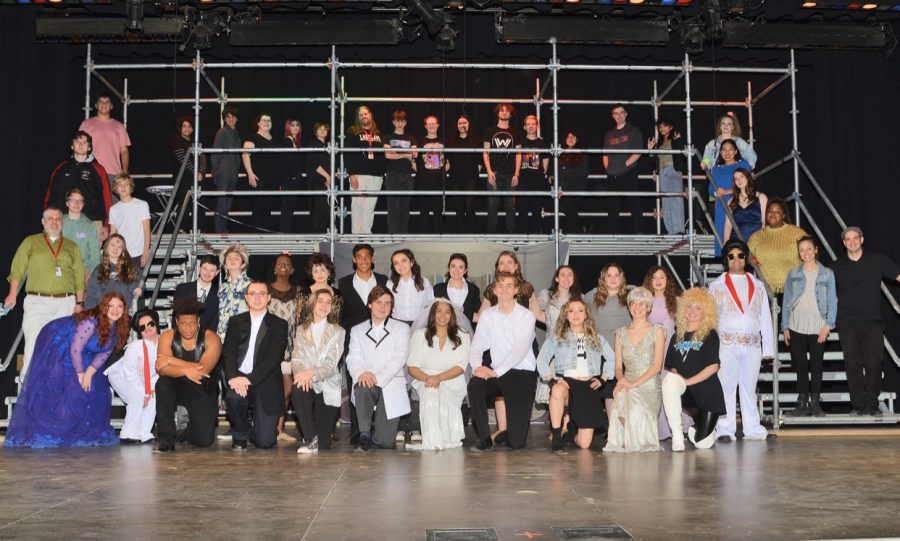 One sleep before opening night the cast and crew smile with excitement as the performance becomes hours away.

The cast, crew, and orchestra of The Wedding Singer put on an outstanding performance at Lakeland Regional High School March 3 through March 5, 2022.

Lead actor Gonzalez shared her reflection on the play with The Ledger. “I think the play went very well. Everything came together which produced a very successful production.” She also recognized her fellow castmates in saying, “Everyone did their part, which made opening night and the rest of the nights a huge success.”

Gonzalez looked back on all of the amazing numbers that were performed that night. However, her favorites were “Come Out of the Dumpster” when Julia was literally trying to pull Robbie out of a physical and mental dumpster. “If I Told You” was another one of her favorites. This song occurred at the beginning of Robbie and Julias love story when Robbie sees her smiling through the window. Little did he know she was smiling about him.

The actor left The Ledger with what she took away from her experience and said, “Something that I took away from the play was that ‘teamwork makes the dream work.’ When everyone puts in their best effort, it is only a recipe for success.”

Another lead, Cook, also had a great performance. His character Robbie dealt with both good and bad times throughout the show. Though expressing these diverse feelings to the crowd may come as a challenge to many actors, Cook did a wonderful job conveying every emotion that Robbie felt. While always looking to improve, Cook shared, “There are some very talented people in this school, and if I want to be close to the level they’re at I need to put in a lot of work on my end.”

When looking back, his favorite numbers were “Somebody Kill Me,” mainly due to the yelling Robbie did while experiencing heartbreak. Though, the sudden voice change gave the audience a great laugh. Cook closed with, “I think it [the play] went well, I personally had a few flaws and mistakes that if I plan on doing the show next year I need to fix, but everyone else did exceptionally well.”

Of course, a show cannot go on without its crew and orchestra. This year, the crew was led by Mr. Matthew Testa. The seamless changes of song portrayed lots of emotion, which helped transport the audience back into the 1980’s. This also helped set the tone and mood of The Wedding Singer from the start.

Teacher by day, Director by night

Ms. Melissa Gentile, English teacher at LRHS, directed this year’s play. This is no easy job, especially when you don’t leave the school from early morning to late night. However, Ms. Gentile used the time to her and the cast’s advantage. She told The Ledger, “[It was] exhausting but very rewarding!”

Directing the high school production is no easy undertaking. Ms. Gentile shared, “During our first month of rehearsals, there were many cast and crew members who were affected by COVID in some way, which slowed our momentum quite a bit. Additionally, there were several cast and crew members that were involved in other school activities that sometimes conflicted with play rehearsals.” In accommodation, she “strove to schedule around all of this as best I [she] could.” Ms. Gentile added, “Luckily, we were able to put in the hours later on in the process once everyone was healthy, and this truly made a difference.”

All the hard work paid off and the performance was outstanding. When reflecting she said, “I felt great pride and joy at seeing the cast come together and truly shine on the stage! It was a strong opening night that was well received by all who attended. I was really pleased with the end result.” She added, “From start to finish, this was truly a team effort.”

If there is one thing that Ms. Gentile took away from the play it would be, “There is no “I” in theater! We did not lose sight of our goal to produce a successful and uplifting show, which I believe we did!”