The Lancer Ledger • May 8, 2020 • https://lancerledger.com/4811/entertainment/party-at-prom-pandemic-style/ 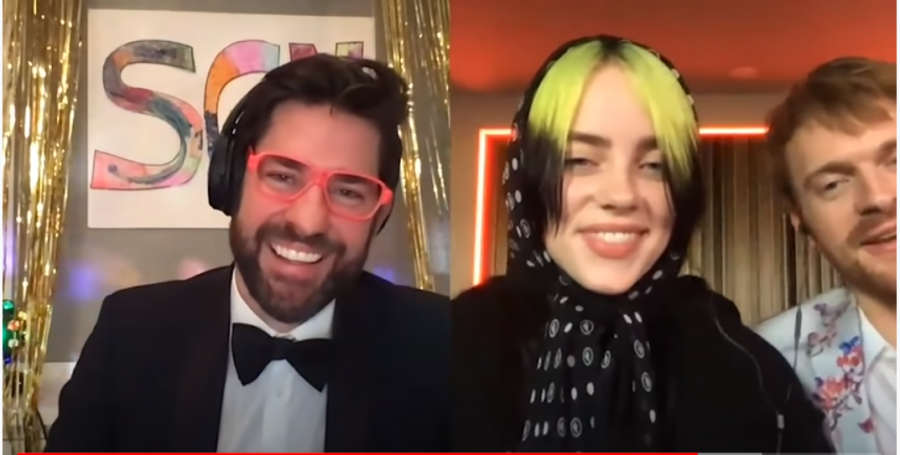 John Krasinski on "Some Good News" with Billie Eilish and FINNEAS.

For millions of high schoolers in the class of 2020, their biggest tradition has been taken from them: prom. With this upset comes an unconventional solution. Teens on the Internet have come together to help make the most of these quarantined circumstances by hosting virtual proms. Virtual prom ranges form being as extravagant as a giant livestream to being as low-key as a Zoom call with some friends.

Additionally, some big names in the industry have made sure seniors get their special night. On April 17, star of The Office, John Krasinski, hosted a Youtube livestream prom for teens across the globe as part of his digital show “Some Good News.” The steam featured one of his former castmates Rainn Wilson and performances by the Jonas Brothers, Billie Eilish, and FINNEAS. The event was well received, with the video documenting it gaining over five million views.

The popular video creation app Tik Tok hosted a “Prom Week” from April 21-25. Their prom was not an event like other virtual proms, but a week dedicated to the teens on the app that wanted to showcase their looks and celebrate at home. The app promoted daily hashtags such as “#promdiy”, “#promportrait”, “#promplaylist”, “#promlook”, and “#TikTokprom”. At the time this article was written, there are 704.6 million videos with “#prom” in the caption on Tik Tok!

However, prom season isn’t over yet. Teen Vogue magazine is partnering with American Eagle and the haircare brand OGX to throw yet another virtual prom over Zoom on May 16. Their event will feature guest appearances from teen influencers, Tik Tok stars, actresses, singers, DJ-s, and more. To attend Teen Vogue’s event, seniors must register –  click here for details.

Even though this important event has been taken away for many seniors, the kindness of teens and others on the Internet have brought the spirit of prom to life regardless of the location. Virtual proms have been a reminder of hope in the midst of this worldwide pandemic.

Although news hasn’t been officially released yet, LRHS has big things plans for our seniors to make sure they don’t miss out on this monumental event.