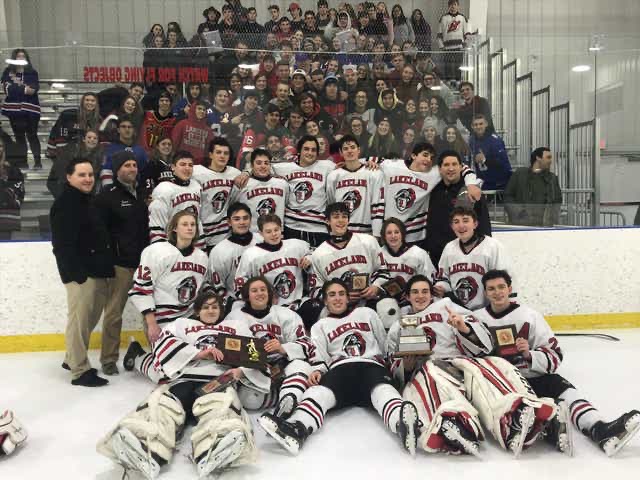 Courtesy of the Lakeland Live Feed

The Lancers have officially won the county championships for the sixth time, more than any other Passaic County school!

The 2019-2020 Lakeland hockey season is one that will always be remembered in Lakeland ice hockey history. The Lancers, 21-4-2, advanced further than any other season in the 27 years the program has existed.

On February 12, 2020, the team advanced to the county championships. Playing against Passaic Valley/Cedar Grove, the team came to the ice ready to win. After an intense game, the Lancers won 3-0. The Lancers have officially achieved the title of county champs six times, more than any other high school in Passaic County.

The team also advanced farther than ever in the states playoffs this season. The team advanced to the semifinals, after their victories against Cranford and Chatham in the first two rounds. At the semifinals game,the Lancers were yet again head to head with their rivals, Ramsey, for a chance to play at the Prudential Center. As expected, it was an intense battle between the Lancers and the Rams. Unfortunately, the Lancers lost 3-0. Despite the defeat, the Lancers still advanced further than ever, making this season one to go down in Lakeland ice hockey history.

Senior and captain Matt Coiley described the season as the best he could’ve asked for. Coiley explains, “Many memories and traditions were made and the team had the tightest bond,” which helped the Lancers do as well as they did. Coiley said the 2019-2020 season is definitely one to remember based on their accomplishments.

The Lancers stayed determined and preserved through any challenges they faced this season. The team “set goals that were never out of reach” to help them progress. “There really isn’t a feeling to describe how I felt knowing my teammates had my back every step of the way,” Coiley said.

The Lancers became one of the best defensive teams in the state led by the standout goaltending of junior Ben Kopacki. Kopacki was a huge asset to the team’s many successes. He was awarded with North Jersey’s Athlete of the Week and the New Jersey Devils High School Player of the Month for December 2019.

Throughout the season, the Lancers as a team shared many highlights and memories with one another. From having “big goals on the ice” to “laughing and joking around” in the locker rooms, Coiley explained how “every moment with these guys [the team] felt like a highlight,” to him.

Overall, the Lancers had a remarkable season that will always be remembered. The Lakeland community is incredibly proud of the Lancers, and is excited to see what they will achieve in future seasons.