Phoenix vs Ledger: Is One Superior? 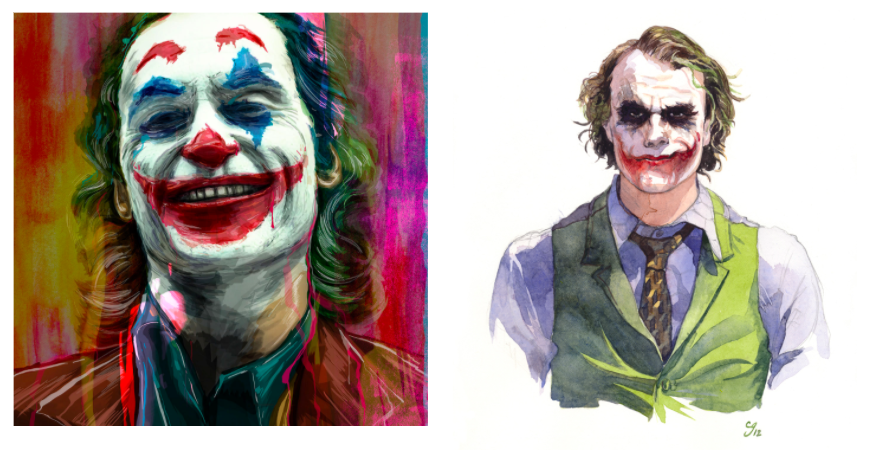 "Took Me By Surprise" by Phil Dunne and "Heath Ledger (The Joker)" by Chad Gow (both licensed under CC BY-NC-ND 4.0)

Joker is a well established character, a household name, and the character has once again surfaced in cinema. Joker (2019) released in October 2019, and Joaquin Phoenix’s performance allowed him to win an Oscar for it. His performance and win are on par with Heath Ledger’s performance in 2008’s The Dark Knight’s Joker. Many argue that one was better than the other, but it’s clear that both Phoenix and Ledger brought different performances that each stand out in their own light (or reflection in their shiny Oscars).

Heath Ledger’s Joker is an outstanding opponent against the Dark Knight himself. He uses chaos and manipulation to break down his enemies. The Joker forces Batman into a corner by killing a person everyday if he doesn’t take his mask off, thus forcing him to break his rule. He corrupted Harvey Dent by killing Rachel, turning  him into Two Face. This forced Batman to cover up his evil deeds by pretending to be responsible for the death of cops.

Joaquin Phoenix’s Joker is an origin story told through Arthur Fleck’s life. He slowly goes down the insanity path, from which society abandons him causing him to develop mental illness. Through a series of unfortunate events, Arthur goes from a somewhat stable job to being a leader of a protest riot on the streets.

Ledger’s Joker to Phoenix’s Joker is a little hard to compare due to the fact we haven’t seen Phoenix’s stand toe to toe with Batman before. But as characters, we can view their traits and their motives. Phoenix’s goal in the movie was to be a standup comedian, but shortly after he fails and eventually is thrown into Murray’s talk show. Ledger’s Joker has no clear goal. All he wants to see is our heroes fail and the world to spin into chaos through a means of turning people against each other.

Each Joker is equally unpredictable. We are shown in one scene Phoenix reenacts killing himself on Murrays show, but (spoiler alert) obviously that doesn’t happen. Ledger is also unpredictable because he is shown getting caught and put in jail. Only then his men kidnaps Harvey Dent, and we, as an audience, don’t know what he is planning to do with Dent or what he is going to do in prison.

Both Jokers are unique in their own regards. Each film, whether it be The Dark Knight or Joker, perfectly nail their iterations of the character, and we as viewers can appreciate their performance on screen and be grateful for having the beloved character be treated with respect. The writing and direction of the two actors definitely deserve the Oscars they won.